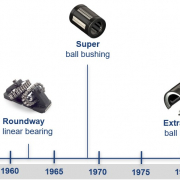 40 BC – Early example of a wooden ball bearing supporting a rotating table was retrieved from the remains of a Roman ship in Lake Nemi, Italy 1917 – U.S. Bearing Manufacturers create an informal group to aid bearing manufacturing for World War I, which led to the founding of ABMA

In the early 1980s,  Pacific Bearing’s founder, Robert Schroeder, invented the first bi-material plain bearing which was size interchangeable with linear ball bearings. This bearing had a metal shell (aluminium, steel or stainless steel) and a layer of Teflon-based material connected by a thin adhesive layer.

History of the Ball Bushing® Bearing

In 1945 the Ball Bushing bearing was invented by John Thomson Sr.  The bushing was the solution to the stick-slip problem in the linkage used to change the pitch of propeller blades in aircraft.  Ball bearings eliminated the stick-slip, binding, and chatter of plain bearing.  Ball re-circulation virtually eliminates wear and provides a constant coefficient of friction as low as 0.001. The Steel ‘A’ bearing was released in 1953.  The ‘A’ bearing design is still being produced today.
For more than 70 years, Thomson has been a leader in product development and innovation of linear motion technology. 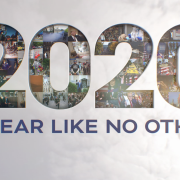 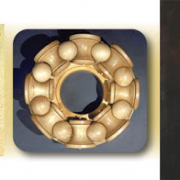 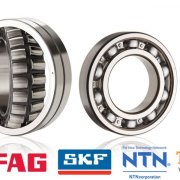 A bearing is a machine element that constrains relative motion to only the desired motion and reduces friction between moving parts. The design of the bearing may, for example, provide for free linear movement of the moving part or for free rotation around a fixed axis; or, it may prevent a motion by controlling the vectors of normal forces that bear on the moving parts. Most bearings facilitate the desired motion by minimizing friction. Bearings are classified broadly according to the type of operation, the motions allowed, or to the directions of the loads (forces) applied to the parts.

The term “bearing” is derived from the verb “to bear”; a bearing being a machine element that allows one part to bear (i.e., to support) another. The simplest bearings are bearing surfaces, cut or formed into a part, with varying degrees of control over the form, size, roughness and location of the surface. Other bearings are separate devices installed into a machine or machine part. The most sophisticated bearings for the most demanding applications are very precise devices; their manufacture requires some of the highest standards of current technology.